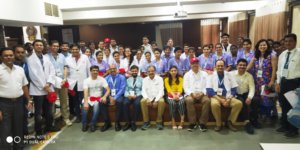 Dr. Vidya Nair, Director- RNHPL who as First Aid Coordinator of this venture organized and supervised the 4 First Aid stations stated that VCA’s intentions to have first aid stations was justified when it was noticed that more than 150 odd spectators availed the benefit. Over and above; medical services of 11 booths were utilized by around 300-400 odd spectators. Timely emergency care to 2 needy spectators and officials and Ambulance transports of needy to hospital by Spectator medical center manned by Dr. Palak Arora was also noted. Earlier OCHRI’s ambulances along with medical team also escorted the India and Australia Team from Airport to their respective hotels.

The commendations on behalf of VCA was conveyed by Adv. Dilip Daga, Chairman- VCA Medical Committee. He stated that the unity, spirit and passion seen in each OCHRI staff member to keep up the image of their city and OCHRI is quite rare and creditable. The medical services provided by TEAM OCHRI was the best-coordinated undertaking. VCA officials were unanimous that such a huge presence of trained qualified medical personnel in uniforms and aprons and easily distinguishable caps all over stadium were never seen earlier.

Dr. Anup Marar- OCHRI Director and Chief Coordinator of this event, said that “OCHRI set a benchmark amongst all Cricket associations of India as stated by VCA officials of assembling so many super- specialists, specialists, trained nursing and paramedical staff with ALS and BLS ambulances more than laid down guidelines, we could help Nagpur becomes trend setter for others to follow in country.” He also conveyed his gratitude to each one of the participating members for their devotion and missionary enthusiasm, which led to success of this project.

Usually only Orthopedicians and Physician are expected in PMC, SMS and RRT while all 4 first aid stations and 11 booths were expected to be manned by MBBS doctors as per laid down VCA guidelines; However, OCHRI medical committee on basis of their previous experience in managing 2016 WCL T20 felt that a varied group of super specialists and specialists were ideally essential on site to face any eventuality. Hence TEAM OCHRI proactively ensured range of specialities to manage any varied emergency needs even from Neurosurgery to Cardiology.