Recently a 1-month baby was brought from Birsinghpur, Satna (MP) in a very critical condition at Orange City Hospital & Research Institute(OCHRI); a unit of Ravi Nair Hospitals Private Limited(RNHPL) Nagpur at around 4.45 am on 28.10.2019. As per history given by parents, the neonate after delivery remained normal for few days but later they noticed gradual increase in breathlessness and tinge of blueness over the nails. Over a period, the baby became very sick and was unable to take feed. They showed it to private practioneers at Satna who asked them to rush to OCHRI. This terminally sick neonate was admitted during night hours through round the clock serving Casualty complex in OCHRI Neonatal Intensive Care Unit. After admission, the baby received prompt attention led by Dr. Kuldeep Sukhadeve- Sr. Pediatrician & Neonatologist and Dr. Pramod Ambatkar- Pediatric Cardiologist.

After initial stabilization, the baby was investigated and noted to suffer from rare cyanotic Congenital Heart Disease namely d- Transposition of Great Arteries with intact ventricular septum. Most of these infants would not survive the neonatal period if misdiagnosed or untreated. Hence, it was decided that specific lifesaving intervention was urgently needed. Baby was immediately shifted to Cath Lab wherein this 2500 gm infant was femorally catheterized by Dr. Kuldeep Sukhadeve to create access for Rashkind Balloon Atrial Septostomy (BAS). Dr. Pramod Ambatkar successfully did BAS.The sick Newborn thermodynamically recovered over 24 hours. The procedure and its result were very gratifying and patient was discharged after 3 days of hospitalization.

Dr. Kuldeep Sukhadeve- OCHRI Senior Pediatrician & Neonatologist Incharge informed that “This condition is a medical emergency, and only early diagnosis and appropriate intervention can avert the development of prolonged severe hypoxemia and acidosis, which lead to death. This intervention can not only save the baby but offer breathing period of few weeks for definitive Surgery I.e. Arterial Switch Procedure.

Dr. Pramod Ambatkar- Pediatric Cardiologist explained that “Deoxygenated (Un-purified) blood coming to the heart is deviated to systemic circulation in place of sending to lungs for purification. The Purified blood which arrives from Lungs is deviated again to the Lungs through the Left Ventricular. Thus two parallel circulations don’t allow purified blood to reach normal circulation.” To correct this such procedure was planned. Making a hole in the Atrial Septum through Foramen Ovale is an excellent clinical intervention which can mix the purified blood with un-purified which can reach the normal circulation through Right Ventricle.  He further added.

Dr. Anup Marar- OCHRI Director said that the patient with d-TGA and intact Ventricular septum are most likely to die in India due to lack of timely diagnosis, desired infrastructure, comprehensive expertise and proper treatment. However, it is the total faith of relatives on treating team which makes dares them to undertake such lifesaving risky intervention. 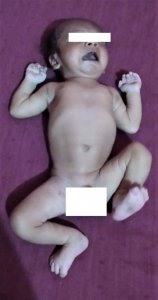 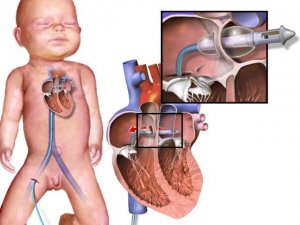