Recently an 18-year-old female 1st year MBBS Student and resident of Nagpur was shifted to Orange City Hospital & Research Institute- a unit of Ravi Nair Hospitals Private Limited, Nagpur on 24.10.2019 during early morning in a very critical condition from another Nagpur based Critical Care hospital with Bilateral Extensive Pneumonia with Renal Failure with Severe Thrombocytopenia. She had persistent complaints of fever and breathlessness and her health was deteriorating, hence her father who is serving as Police Inspector shifted her to OCHRI as per advise of senior police official. One examination, her General condition was not satisfactory and oxygen saturation was very low. Immediately She was put on Bipap support with other allied supportive treatment. She was admitted under care of Dr. Rajesh Atal- Senior Critical Care Physician. Battery of investigations was done in which she was found to have Sickle Cell Disease. She was diagnosed first time as a Sickle Cell Disease at the age of 18 yrs. She was not having any history of Sickle Cell related illness in the past.  This patient had a prolonged stay in ICU and was managed with Bipap Support, Hemodialysis and other supportive treatment protocol. After prolonged stay and a very stormy course she was successfully discharged from hospital. Parents of this patient thanked and appreciated the effort of treating doctors and OCHRI.

Dr. Rajesh Atal informed that, “She was diagnosed Sickle Cell Disease at the age of 18 years which is an unusual thing to occur, because usually Sickle cell is diagnosed in childhood itself. This patient has no symptoms of Sickle Cell till date and was admitted first time with Sickle Cell Crisis with related complications. The cornerstones of treatment involve the management of painful vaso-occlusive crises, hemolytic anemia, and disease complications as well as prevention of infection. Allogeneic bone marrow transplantation is the only curative treatment option.

Dr.Anup Marar- OCHRI Director added that Sickle cell disease Sickle cell syndromes are hereditary hemoglobinopathies in which red blood cells are not shaped as they should be. Red blood cells usually look like round discs. But in sickle cell disease, they’re shaped like crescent moons. Although Neonatal screening for sickle cell anemia has been implemented across the U.S., it is still not made compulsory in India. It should be made compulsory in areas and communities where SCD is rampantly observed. 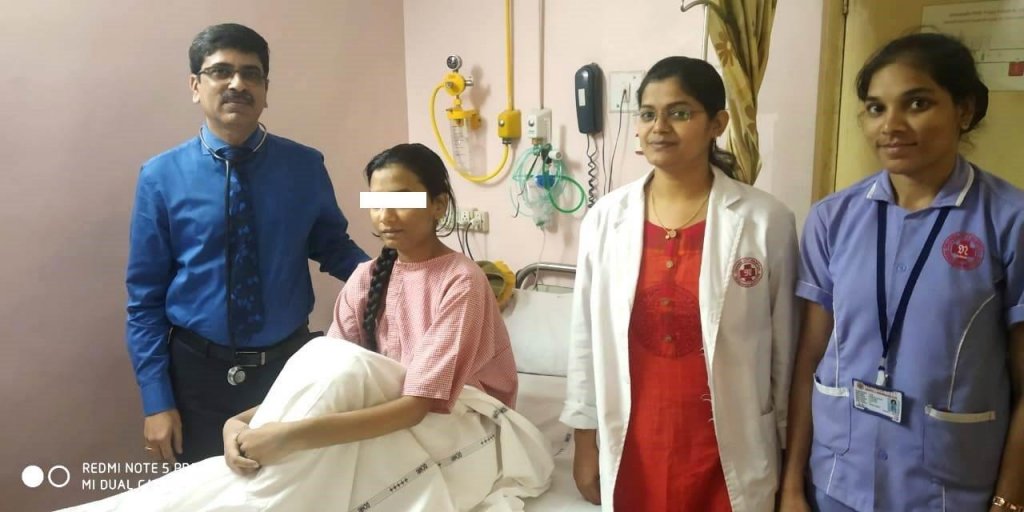