A 39 years old male, from Betul, MP, came to Orange City Hospital & Research Institute with h/o severe pain & weakness in Lt. Leg and difficulty in walking since 6 months. He was diagnosed as Neurofibromatosis Lt. Leg with neuropathy and had been attending various hospitals of City and Central India and even approached AIIMS and Medanta Hospital, New Delhi but no relief. They were conveyed that there is chance of losing power in left leg after surgery. He used to shrike in pain due to the radiating pain caused by compression of two main nerves by the tumors.  He came to OCHRI after being counselled by his father. He was admitted under care of Dr. Shailesh Kelkar- OCHRI Senior Neurosurgeon. He was thoroughly investigated and diagnosed as Neurofibromatosis encasing the Left femoral and Left Tibial nerves with related Neuropathy. Inspite of risks involved; his relatives having complete faith on OCHRI due to previous successful treatment gained by many of Betul residents since last 23 years; consented for surgical intervention by Dr. Shailesh Kelkar as it was very unbearably painful for the patient.

Dr. Shailesh Kelkar said that “Neurofibromas tend to encase the nerve roots, in contrast to schwannomas which commonly displace the nerve root due to their asymmetric growth. Schwannomas are usually round, whereas Neurofibromas are more commonly fusiform.” This patient was suffering from Plexiform Neurofibromatosis and had to be excised as it was causing compressive symptoms on two important left leg nerves, he added.

Dr. Anup Marar- OCHRI Director complimented Dr. Shailesh Kelkar and his team and stated that although many head injury “hot” cases are routinely managed at OCHRI; it is “Cold” neurological case management (like tumors etc.) that proves the surgical acumen of OCHRI Department of Neurosurgery which presently comprises of 3 Neurosurgeons Dr. Shailesh Kelkar, Dr. Sumit Hire and Dr. Shailendra Anjankar. Needy central Indians with varied brain and spine tumors apart from spinal disc complaints reach OCHRI to seek solace in view of the round the clock comprehensive diagnostic, surgical, critical care and rehabilitation facilities available under one roof. He thanked the family for having shown faith on OCHRI after having visited best of centers in India. He added that OCHRI attracts many needy patients from Betul and others districts of Madhya Pradesh and even Chhattisgarh for varied diseases. 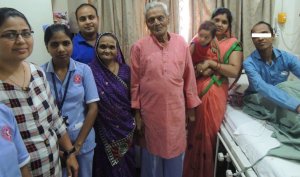 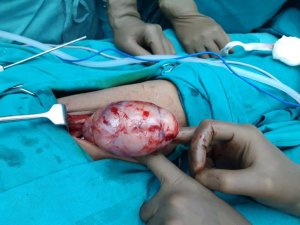